The International Institute for Analytics (IIA), the leading independent research and advisory firm focused exclusively on helping clients improve their analytics performance, announced continued growth for the first half of 2017, reflecting an overall increase in analytics investment across enterprises. Highlights from the first half include a 24% growth in bookings, record levels of service delivery and client satisfaction, and appointment of new Chief Analytics Officer Bill Franks.

IIA was founded in 2010 on the premise that competing on analytics is the future. In 2017, analytics is more critical to enterprises’ survival than ever before. This urgency explains why organizations across a breadth of industries are prioritizing analytics development and utilizing IIA’s services. IIA’s bookings for the first half of 2017 increased 24%, compared to the same period last year. New clients include Southwest Airlines, Bridgestone, Astellas, VSP, Cisco, LPL Financial, Marathon Petroleum, Standard Bank of South Africa, Bison Transport, Xero, Commonwealth Bank of Australia, and Washington Healthcare Authority. In its seven-year history, IIA has served 66 of the Fortune 1000 companies.

Clients use IIA’s Research & Advisory Network (RAN) service to leverage the collective wisdom of experts and practitioners to advance their organizations’ analytics capabilities and create positive business impact. In the first half of 2017, more than 70 analytics leaders got answers to their pressing questions via IIA to quickly solve their analytics challenges.

“Getting the right expertise at the right time is crucial to analytics leaders, teams, and enterprises,” said CEO Jack Phillips. “IIA’s proven service model helps drive analytics performance and create competitive advantage faster than traditional development approaches alone.” Based on IIA’s 94% subscription renewal rate, clients seem to agree with Phillips. In fact, the weighted growth among research clients (meaning service expansions in addition to renewals) for the first half of the year was 139%.

In March, IIA named thought leader Bill Franks as its CAO. In his new role, Franks provides perspective on trends in the analytics and big data space. He helps guide IIA’s global community of analytics practitioners in determining the best strategy and path forward for their particular analytics journey. To learn more, read the press release.

Another highlight for IIA was the 2017 Analytics Symposium in Silicon Valley, which had record attendance. IIA’s Analytics Symposium is a semi-annual event that brings together analytics practitioners for moderated discussions on key topics, industry specifics and functional applications. Keynotes at Symposium this past spring included thought leaders Jerry Kaplan, Geoffrey Moore and Cole Nussbaumer Knaflic, as well as Ford Motor Company CAO Paul Ballew. 97% of attendees would recommend the event to their colleagues and peers.

The next Analytics Symposium will take place Oct. 10-11, 2017 at the Gleacher Center in Chicago. As 2017 marks the 10th anniversary of Competing on Analytics by Tom Davenport and Jeanne Harris, event will feature a discussion with the authors. Other speakers include Morgan Stanley Chief Data & Analytics Officer Jeff McMillan and healthcare disruption expert Maryam Saleh. The 2017 ANNY Excellence in Analytics Award winner will also be announced at Symposium in October. The ANNY award recognizes an organization’s application of advanced analytics to drive measurable business results at the project or organizational level.

IIA looks forward to working with current and new clients to develop and sustain their analytics capabilities and compete in the data economy. 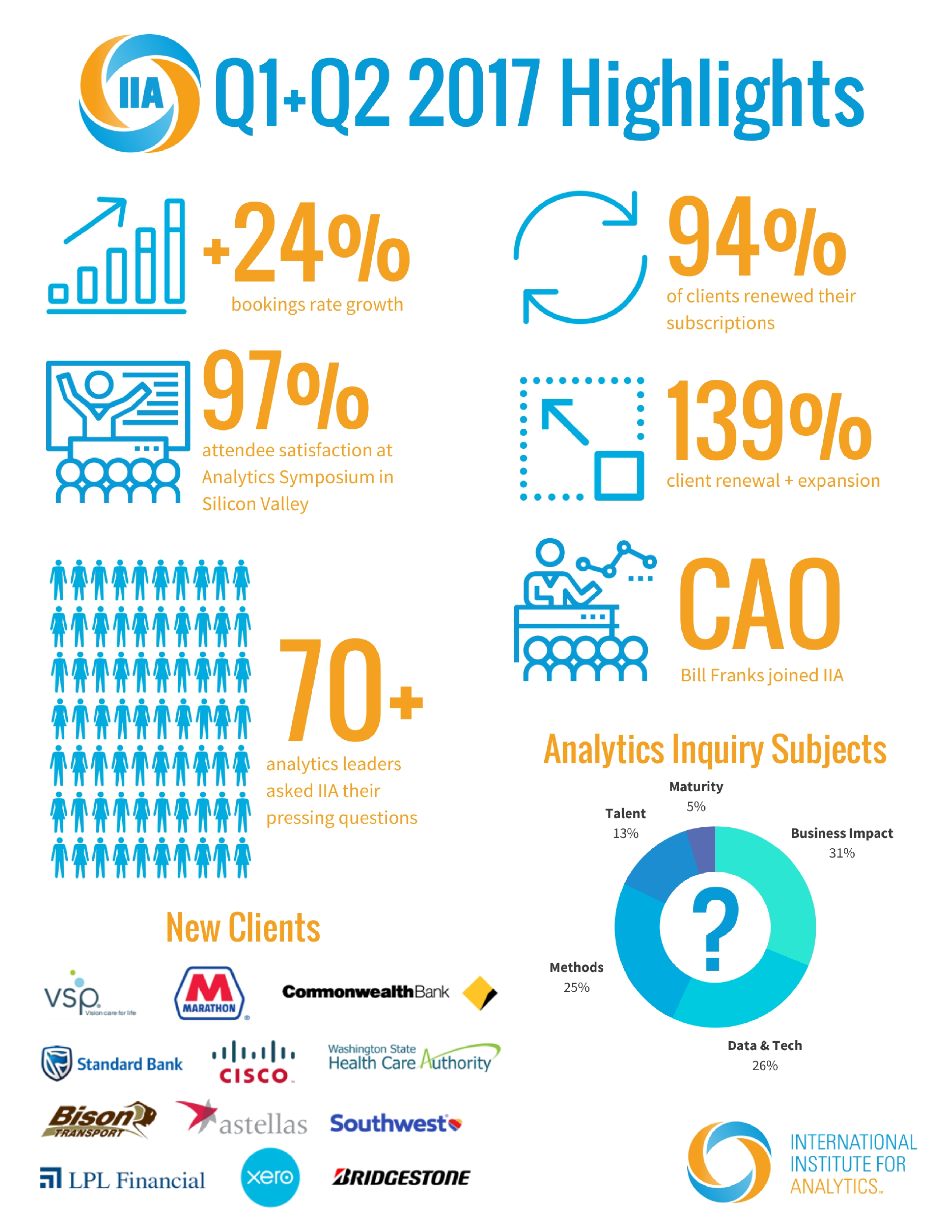